I have attempted to write several screenplays for over a decade with zero success in completing them. I need some structure and that is what (I hope) this filmmaking class is giving me. I like the way my teachers are emphasizing that as filmmakers you need to be able to tell a story through pictures/film, a visual story.

We have 3 films projects to complete in this course. The first one was a 2-3 minute silent film. We were not allowed to use any sound at all but still convey a story in it. Part of the structure that we're learning is what pre-production tools to use to help craft films. For this film we had to create (1) a script, (2) storyboards, (3) an overhead shooting diagram, and (4) a shot list.

Building off the pic I took of my daughter's remote work desk, I wanted to create a film that showed the desperation and struggle that some kids feel with this pandemic and remote learning. In particular, my daughter has gone through fits of just "being done" with remote learning. (To be transparent, she is doing really well and we are fortunate to be where we are, realizing that so many others have way tougher situations). I created all the required docs around this theme and even had a title for this film; rEmotion. My story would start with her with her head down at the desk, headphones on, while school is flashing on her laptop, she is distracted and sad. I would have some shots of it raining out her window, trying to establish the sense of sadness. She would then receive a message from a friend asking for help. She would sit up to help her friend and that would give her the self-motivation to start paying attention. She would then be attentive and finish the day with a sense of "you got this" type of accomplishment. The theme of my story is finding something, a message inside that drives self-motivation, self-confidence. I created all the required artifacts for our critique class. This class is intended to give us help and guidance on our projects prior to filming. The main problem I thought I had was that my storyboard and shotlist called for 31 different shots. We were supposed to limit ourselves to 8-10 shots for this project. 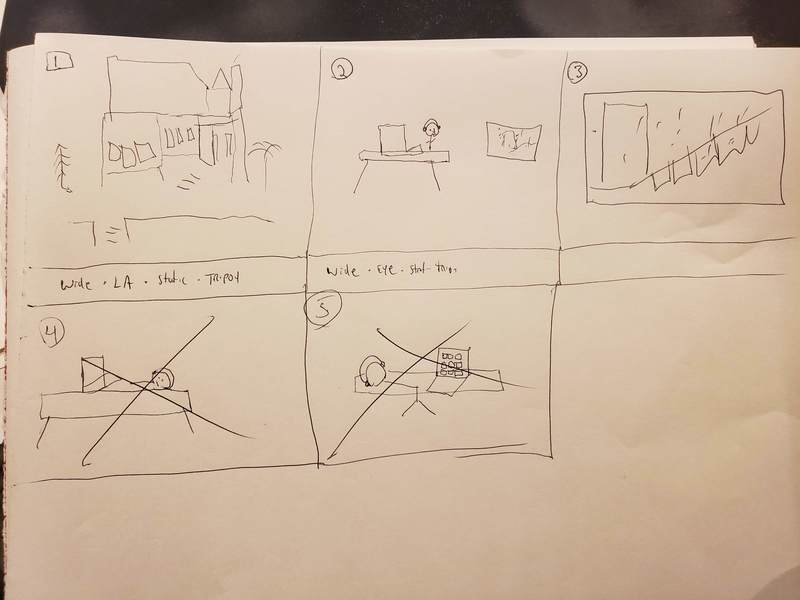 I gave my spiel to our screen writing teacher (Ben Maraniss) and the class and explained my dilema of having too many shots. As I was looking at a blank set of zoom faces I realized... I over complicated this. I recognize that because I used to (still do at times) do that in a lot of my software engineering work too. Ben asked me a couple "simple" questions. "Who is the main character?" Me: "I 3rd grade female student." Ben: "What does she want?" Me:"To be done with school." Ben:"Be more specific. How does the audience know that. What does she want?" Me:"To be done with this pandemic." Ben:"That's too broad. You are going for big emotions, but with film, you need to focus on a metaphor. Something simple. A simple action. What does she want? What does she need?" Me: "... I have nothing."

Ben gave me some advice and some things to think about. I took the feedback to heart and understood what he was getting at. I need to simplify but for the life of me I couldn't think of how to do that with my current scenario. It was time to start from scratch. It was Friday and we had to have our films completed and uploaded before the next Thursday so that we could screen them and receive feedback. I panicked and decided to do a horror short based on lights mysteriously going on. I could have the main character (my wife?) and what she wants is for the lights to remain off when she turns them off. Simple, and very concrete and actionable. I just need to round out the story and maybe I could even pull it off with 10 shots or less.

By Friday night, I was creating a storyboard for that film and I it hit me; A message in a bottle. Back to the first theme of the student finding an inner "you got this" message, what if I created a short film with her literally trying to fetch a message in a bottle from the sea? We're fortunate enough to live super close to the Puget Sound. I checked online and found some bottles that would work perfectly at Michael's craft store and started storyboarding, creating the shot list, etc. By 2 am I was finished and ready to pick-up my curbside bottles, and start filming the next day.

The sound is never that rough. It was cold, rainy, and windy. Yuck. We ended up going to the other side of the peninsula and found calmer water and a good spot to film with the city as the backdrop. I started to look at my shot list and everyone was already cold and miserable. I downloaded Filmic Pro for my samsung phone that I was filming on so that I could try some of the things I learned in our cinematography class, but I really didn't (don't) know what the hell I'm doing. In short, execution went to hell and I just started shooting from memory and not using the pre-production documents I created. (bad idea) I had a scene where my daughter was lying on a rock to get the message from the water but the rocks were too slippery for her to do that. I just started filming, improvising, and I was about to give up when she started going for the bottle on her own. I was able to film that. I went home that night and was up until 2 am again editing, realizing I needed more shots since I went off script. We went out the next day and it was luckily more pleasant so we got the shots.

Back to the editing room... I ended up with 59 shots. I created by first rough draft by Tuesday, but it was 3 minutes long. I needed to cut it down by at least 1-minute. That night, I scrubbed shots that weren't necessary and it was such a big learning for me to look at my film with the "do I need this shot" lens. I think I will always add a "scrub" edit like this to any film I direct/produce/edit in the future. It felt really good.

Finally, by Wednesday night, I had my final version to screen with the class the next day.

Overall, I'm pleased with it given where I started a little over a week prior. In the final version, i added a bit of color grading to try to make it look more cinematic, tried to alter the position of some of the shots to follow the Rule of Thirds based on some feedback from a good friend, and trim it down to what I thought was essential for the story.

I received really good feedback from my class. The first question Ben asked was "Why was she at the water?" - I asked my director teacher, Billy to critique it too and he provided similar feedback basically stating that I needed to provide more context and maybe a broader establishing shot. What i was going for with the first shot was to show a close-up of the mask with the title of the film, "the message" to appear where the mouth is, hinting that the message was to come from her own mouth. I don't think that worked and without providing the setting context, the viewer is left to interpret on their own. The city shots are fairly big, drawing the viewer to read into that when in reality the city backdrop was only because the other side of the water was too rough.

Because of this, some of the feedback I got from the class was people stating the message came from an unknown source, or somewhere from the city, or even from the divine. The point of the message coming from inside was not made clear enough. In the end, that is okay because I am happy that people got SOMETHING out of it, even if it wasn't what I intended. That is part of the beauty of this whole creating world. I love putting something out there. Something new that I created for others to get something out of it, and hear different things that I never thought of. I like this medium.

I don't have any hard data on this but I wonder if one of the few silver linings in this pandemic is an outburst of more art being created. I'm not trying to minimize any of the hardships, but I have seen a lot of art being created in my circles.

As I was going through this process and wanting to capture the sadness and struggle of remote learning, a friend of mine shared this video on social media. This was created by the teenager (Liv McNeil) who stars in the film and I think she captures that feeling perfectly with her adaptation, numb.